Do you want to know what are the best anime fights of all time?

Then you’ve come to the right place.

Because in this list, we go over anime with the most amazing fights.

So the rules are pretty simple for this best anime fight scenes list.

Fights that engaged the audience most will make it onto this list and it’s not limited to one fight per anime show. 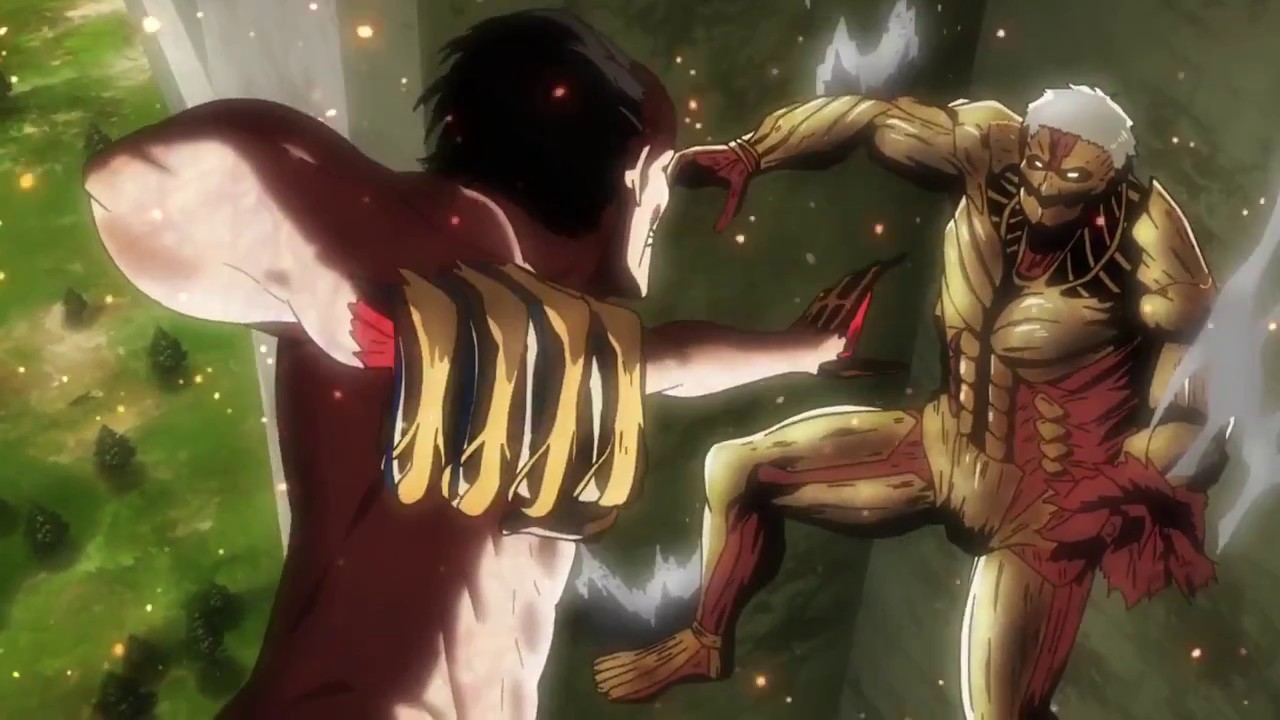 This fight was super interesting to watch because Eren likes to fight with just brute force, not using his brain. He rages and goes for his opponent with no analyzing whatsoever.

We saw this brute when fighting Annie in the forest. Although Eren was much stronger in power, Annie still literally took his head off by out-smarting Eren.

This time Eren decided to fight smart. Well not at first but after he kept getting his butt kicked. When fighting the armored Titan, Eren keeps trying to use brute force to defeat him.

Unfortunately, the armored Titan is much stronger than him in raw power. Instead, Eren holds his rage back and uses his head.

He decides to use different techniques and wrestles with Reiner, who is if you didn’t know already, “the armored Titan“.

After training with Annie, Eren figures out how he can win the fight against the Armoured Titan. Rather than just forcing everything to death, Eren throws a faint right hook.

Now the Armoured Titan wants to counter with a straight hand because it will reach Eren faster.

Next Eren manages to perform a “triangle choke-armbar”  At this point Eren has managed to crack the armor and is literally tearing him down piece-by-piece. At this point, Eren has ripped the Armoured Titan’s arm off.

Of course, after this, the Armoured Titan manages to escape from the armbar because Eren just tore it off. And Reiner now goes in for the spear.

Unfortunately for Reiner, Eren has been training under Annie and this girl can fight!

Whiles Eren is getting speared, he uses it to his advantage and performs a “neck crank from guillotine”  At this point, Eren is completely tearing the Armored Titan apart, not with pure force but with technique and that’s what I love about this fight scene.

Real life moves are performed and it increases the realism.

Unfortunately, this fight ended with an even bigger Titan, dropping a big-ass wall on Eren.

What makes this fight so great is the story behind it.

2 friends who go way back and have strong beliefs, unfortunately, it’s these beliefs that tore them apart.

They’ve both fought side-by-side, risked their lives together but Sasuke decided to separate from everyone and he wanted to wipe out the Leaf village. Of course, Naruto wasn’t going to let this happen.

Naruto and Sasuke have their final battle. There’s no music in the background and this really shows how serious the fight is.

The fight shows how well they know each other because they’re finishing each other’s hand signs and also preventing them from finishing.

We see Sasuke continuously not allowing Naruto to finish off his shadow Jutsu.

Both using their Jutsu to the max, pulling out everything they can with no reserves. Laying it out all on the line, Naruto uses his 9 tails fox clones to compete with Sasuke.

Naruto and Sasuke pull out their most powerful Justsu, levelling landscapes. 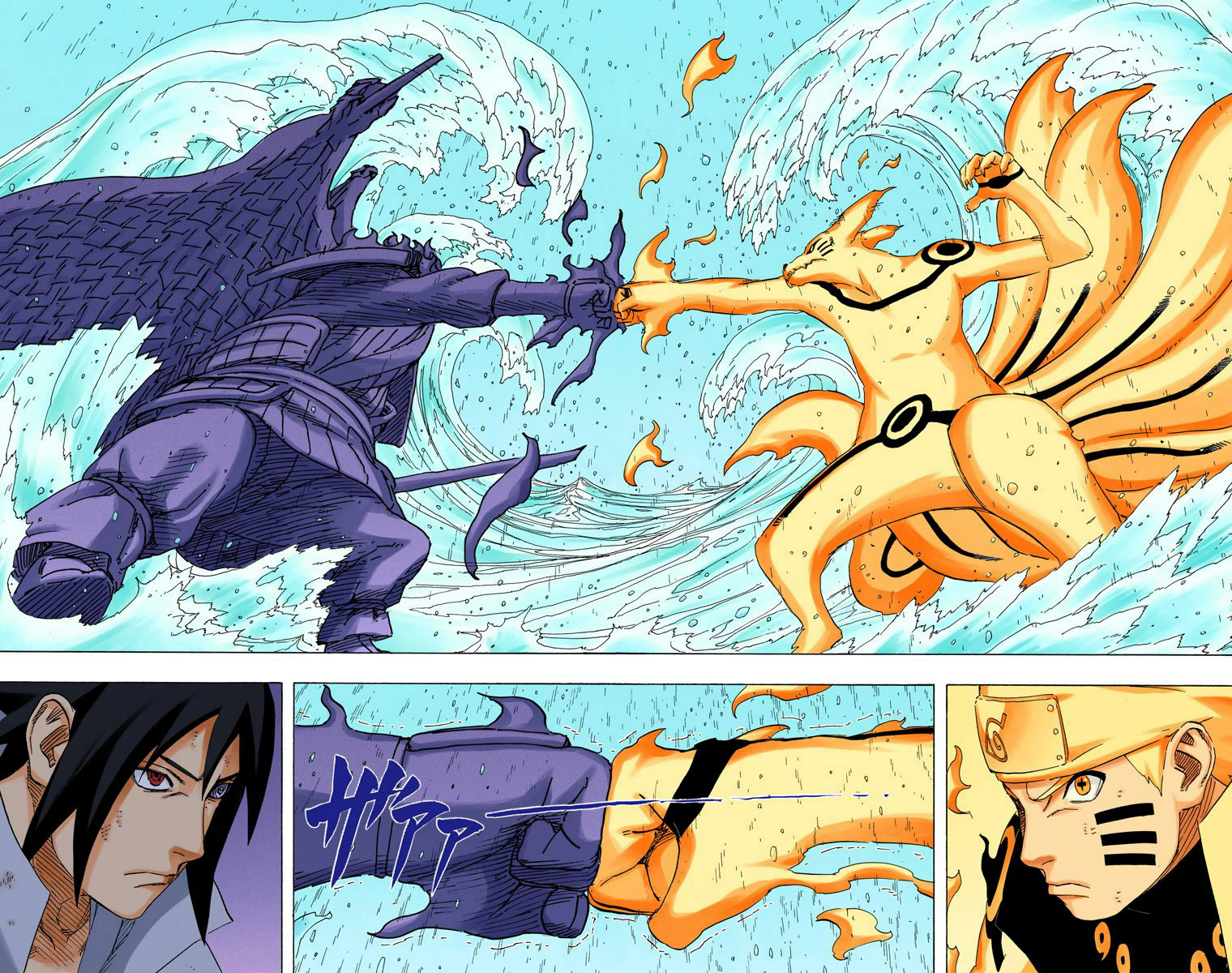 At this point, they’ve used their chakra to the max. It’s at this point, the brutal fist fight begins. Beating each other to a pulp and literally getting their teeth knocked out.

After they’ve given everything they’ve got, they decide to take a lay down. 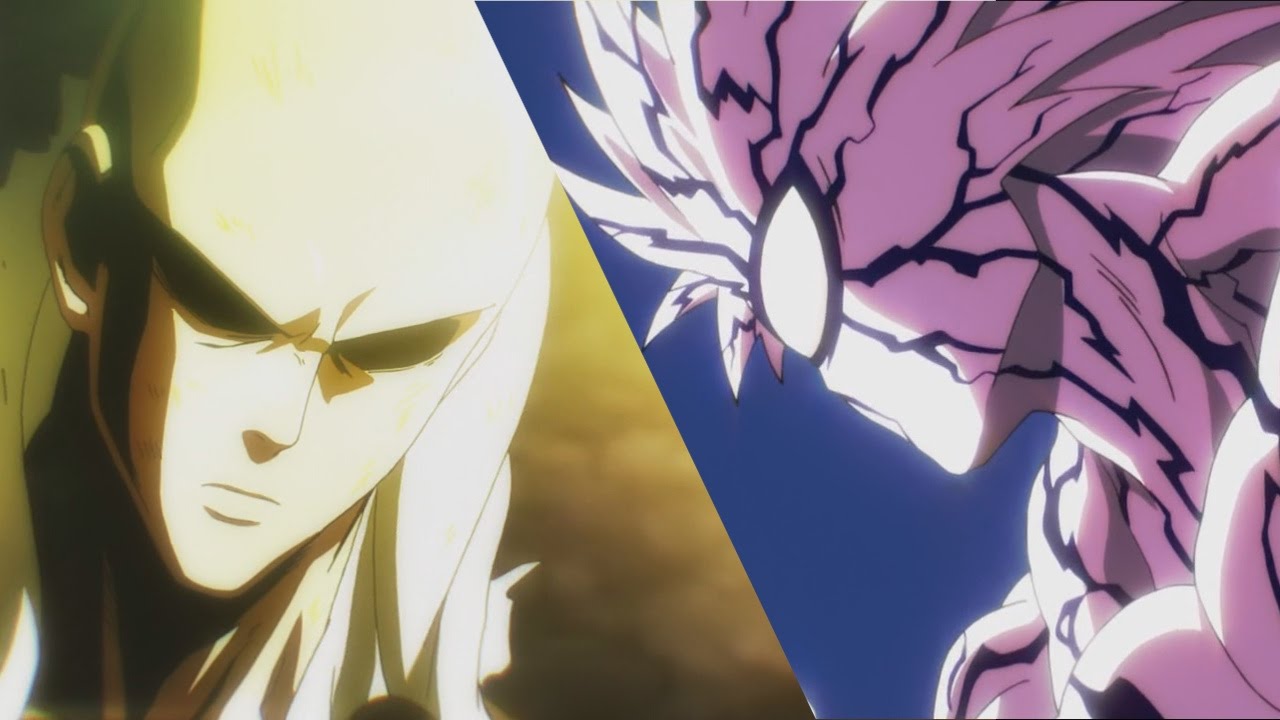 Saitama VS Boros is the definition of over-the-top.

The best thing about this fight is how Boros travels across the galaxy and takes the fight very seriously.

On the other hand…

Boros is the strongest in the universe, (or at least he thought so) searching for twenty years to find a worthy opponent. An opponent that could rekindle his passion for battle.

Well, he got more than he bargained for.

Boros is giving his all and Saitama is casually walking backwards, just not interested. 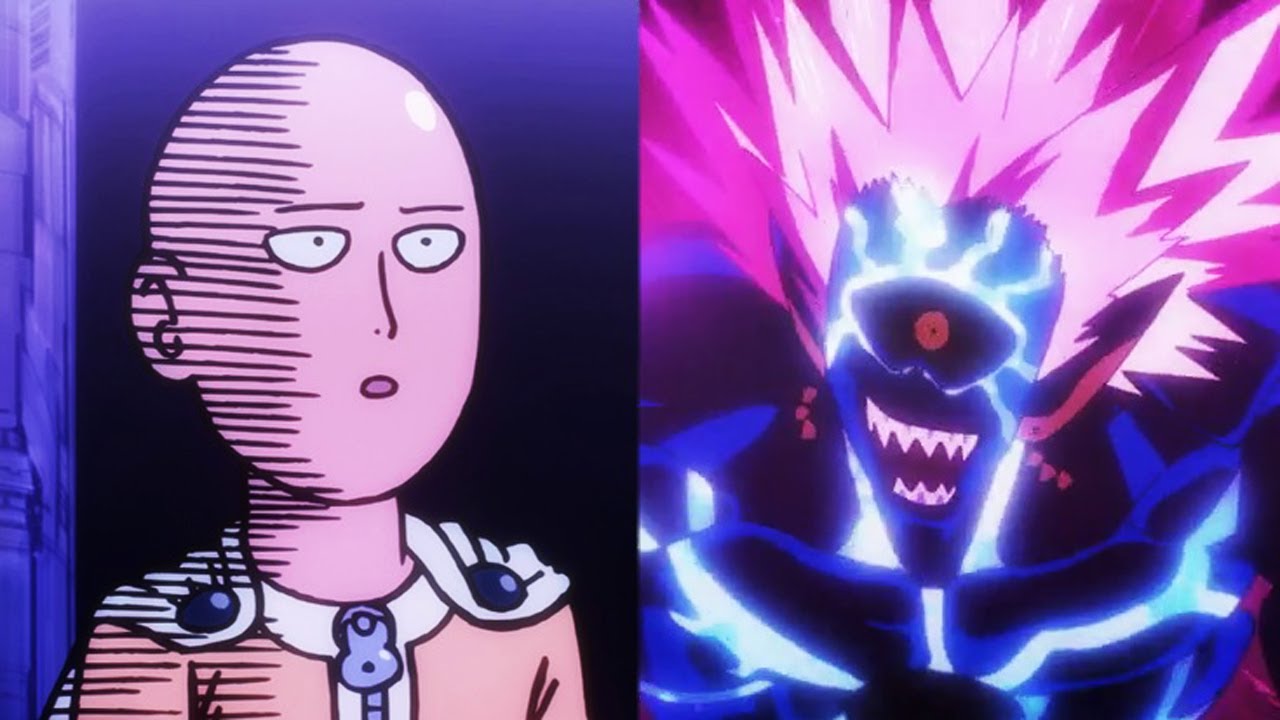 When watching this you can’t help but get hyped. So many things going on and it looks kinda ridiculous but that’s why we love it so much.

So much power is being displayed, in-fact Saitama gets kneed straight in the gut and blasted straight to the Moon.

Saitama doesn’t give a damn and his facial expression shows that he’s not interested one bit.

This fight is so over the top and we love it. Its ridiculous levels of intensity, power, animation and just the energy that surges throughout our bodies whiles watching is incredible.

Pure exaggeration, enormous powers with limitless extents, these beings can do whatever the HELL they want.

It just shows what a pen and paper can really do, when left to free and open minds.

I’ve replayed this fight so many times, I think I’ve broken the button. 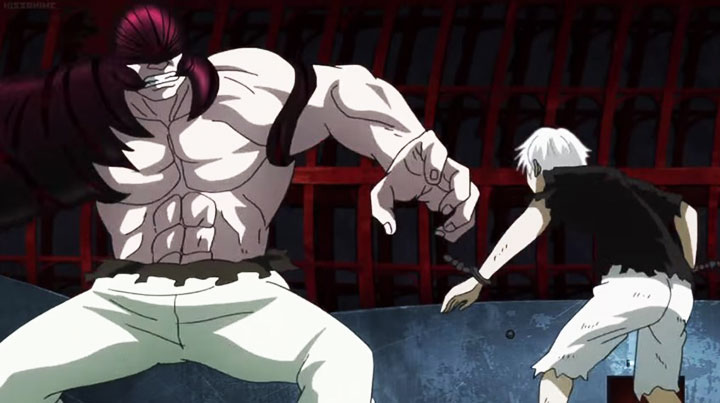 Kaneki VS Jason was one of the top oddly satisfying anime fight scenes.

At first, we see Kaneki getting mercilessly tortured, having his toes and fingers cut off. What makes this scene sickening is how Jason used psychological tactics to keep Kaneki sane.

Jason makes Kaneki do mathematical sums like counting down in numbers. The purpose of this is to retain his sanity.

You see, our brains have a safety mechanism to shut down if we’re in excruciating amounts of pain.

This safety mechanism can cause our bodies to become unconscious or lose our sanity in-order to block out the pain.

In this case, Jason is making Kaneki do logical mathematical sums and this stops his brain to act irrationally, hence maintaining optimal pain levels.

Kaneki still falls in and out of hallucination, I guess you can only do so much to a person before they break.

If that wasn’t already enough, Jason brings out 2 people who are in love with each other and makes Kaneki decide which one should be killed.

Of-course Kaneki decided he can’t pick one, so instead, Jason straight up murder both of them.

Transforming into a true Ghoul. This is where the tides turn.

Kaneki stabs into Jason’s back, making him do mathematical problems, talk about getting a taste of your own medicine.

At this point, Jason is literally in tears. 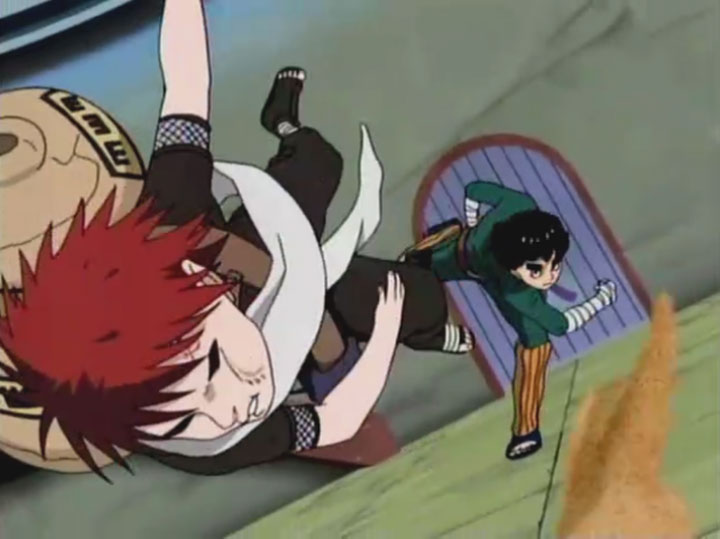 Rock Lee VS Gaara is a classic fight.

The hype for this fight was intense. Everyone was shocked when finding out Gaara had a sand manipulating Jutsu and all Lee had was taijutsu.

Lee was struggling to hit Gaara because his shield of sand protected him, it seemed impossible to penetrate the sand or at least be faster than it.

Lee was holding back nearly all of his power the whole time. Guy Sensai allows Lee to remove the weights from his legs, you’re probably thinking “taking off a couple of pounds, what’s that going to do?”

Well, it turns out the weights Lee was wearing, weighed a ton.

Punch after punch, kick after kick and finally breaking through Gaara’s sand wall. Smashing him straight on the head! It’s the first time we see Gaara bleed.

Only to find out…

Gaara was wearing his sand like a coat of armor. Absorbing any attack. 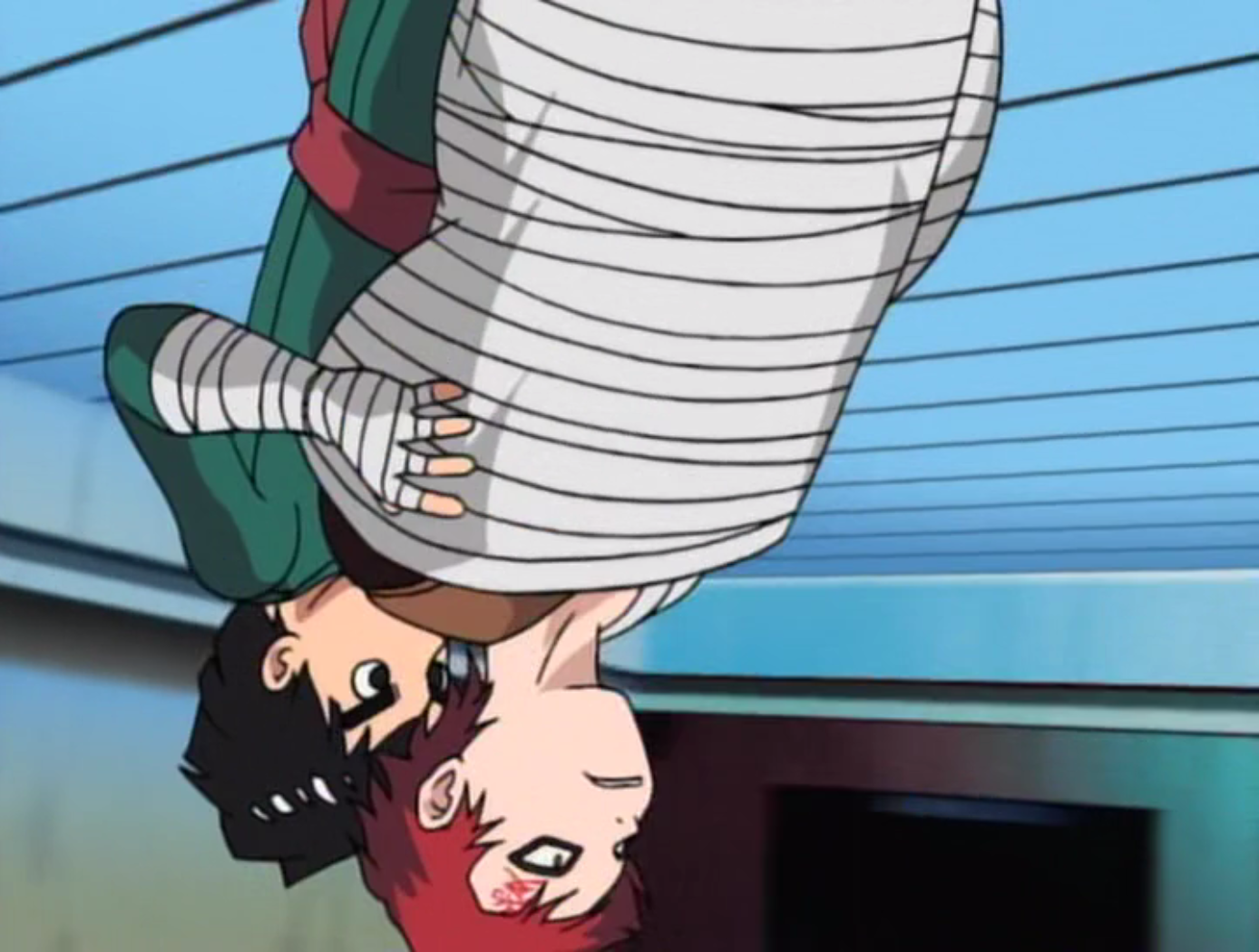 Lee must have done some serious damage, right?

It turns out, the Gaara we saw get smashed into the ground was a fake, made from sand. 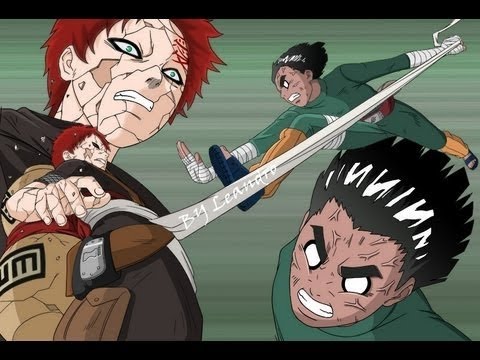 …it’s now or never, after this attack Lee’s body will not be able to move.

Smashing Gaara around like a rag-doll, Gaara’s sand shield can’t keep up with him, the only thing protecting Gaara is his sand coat armor.

There’s no way Gaara could have survived that.

YOU WON’T BELIEVE THE NEXT PART…

…Gaara’s shield could not keep up with the beating, so instead, it cushioned Gaara’s crash into the ground.

At this point, Lee can only crawl and on the other hand, Gaara is going in for the attack.

…Gaara goes in for the kill but Guy Sensai steps in, swiping Gaara’s sand away.

It’s too late for Lee, he lost the match as soon as Guy stepped in. The winner is Gaara.

But that’s not all…

Lee manages to stand up but it’s not Lee standing. It’s his body. You see, Lee is unconscious but his body stands up because he simply does not know how to quit. 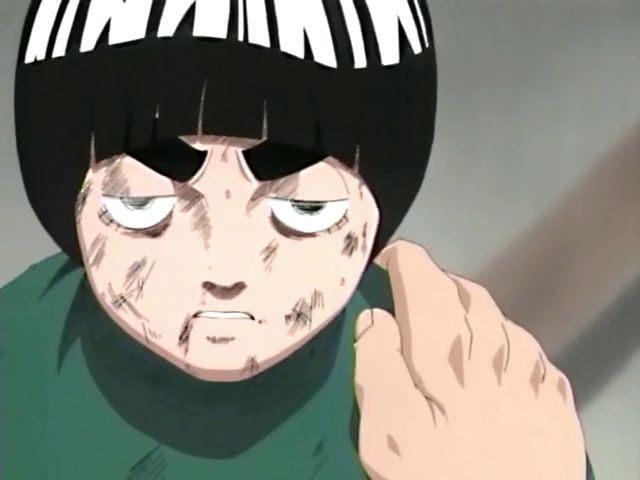 And that is why Lee VS Gaara takes number 1 on this list of “Anime Fight Scenes”.

Lee shows hard work pays off and his willpower is something nobody has ever seen before.

Training like there’s no tomorrow. Lee did not have any talents or gifts, what he had was work ethic and proved that he was one of the strongest ninjas out there.

So those were best anime fights of all time.

Which fights did we leave out that you thought should have been on the list?