Lelouch vi Britannia is the main protagonist in a popular Japanese TV show called “Code Geass“. Lelouch is the forgotten Prince of Britannia who the world thought was dead.

On the way back from school a witch known as C.C emerges and gives Lelouch the power of “Geass“. Lelouch’s Geass power gives him the ability to command others into doing anything he wishes.

With his new Geass power and incredible genius in battle. Lelouch puts together a resistance group called “The Black Knights” and becomes their leader.

The Black Knights don’t know their leader as Lelouch but instead as “Zero“.

Lelouch or Zero as he is known to the rest of the world only has 1 goal in mind. And that is to destroy the Holy Britannian Empire. 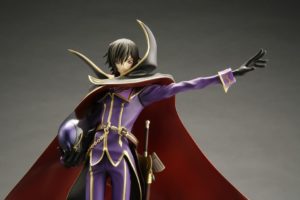 This is actually the 10th-anniversary version Code Geass PVC figurine made by Megahouse.  A brilliant action figma of emperor Lelouch to add to your collection.

Code Geass is a thrilling series and one that you can’t miss out on. In fact, it made the top 5 phenomenal anime of all time.

If you’re a mecha fan you will fall in love with Code Geass at first site and if you’re not a mecha fan like myself. You will still enjoy it all the same.

You see, the Japanese lost the war against Britannia due to a new weapon called “Knightmares“.

A Knightmare is a robot which a human will enter into and control for the purpose of causing mass destruction on the battlefield.

These Knightmares are constantly being upgraded by scientists. One of the most advanced Knighmares is called “Lancelot” controlled by “Suzaku“.

Suzaku is Japanese or 11s as they are now known. Suzaku has decided to betray his fellow Japanese and join the winning empire of Britannia.

His people hate him for it but Suzaku believes it’s for the greater good of the world. I don’t think so, the only thing that Britannia wants is to pile up dead bodies.

A Gift to You or A Friend

Any anime fan will be able to appreciate this Code Geass Lelouch figure. It would be a joy to walk into a room seeing this piece on a shelf and simply admiring it.

Investing in anime figurines can get expensive but this particular figure is well priced and deserves every penny.

If you’re not already a collector then starting with a well-known series like Code Geass will help. Simply because there are enough characters to collect and not too many that you will run out of shelf space and money.