Eren Jaeger is a tough character and fears nothing. He only has one goal in life, and that’s to kill all the Titans.

He saw his own mother get eaten by a Titan when he was only a child. This forced him to really toughen-up and train to be the strongest Titan slayer.

Eren is the toughest soldier humanity has ever had.

We will be going over quotes only spoken in season 1 and season 2 of Attack On Titan. No manga spoiler here.

These are 35 crazy Eren Jaeger quotes…

35.”I disposed of some dangerous beasts. Mere animals that just happened to resemble humans.” 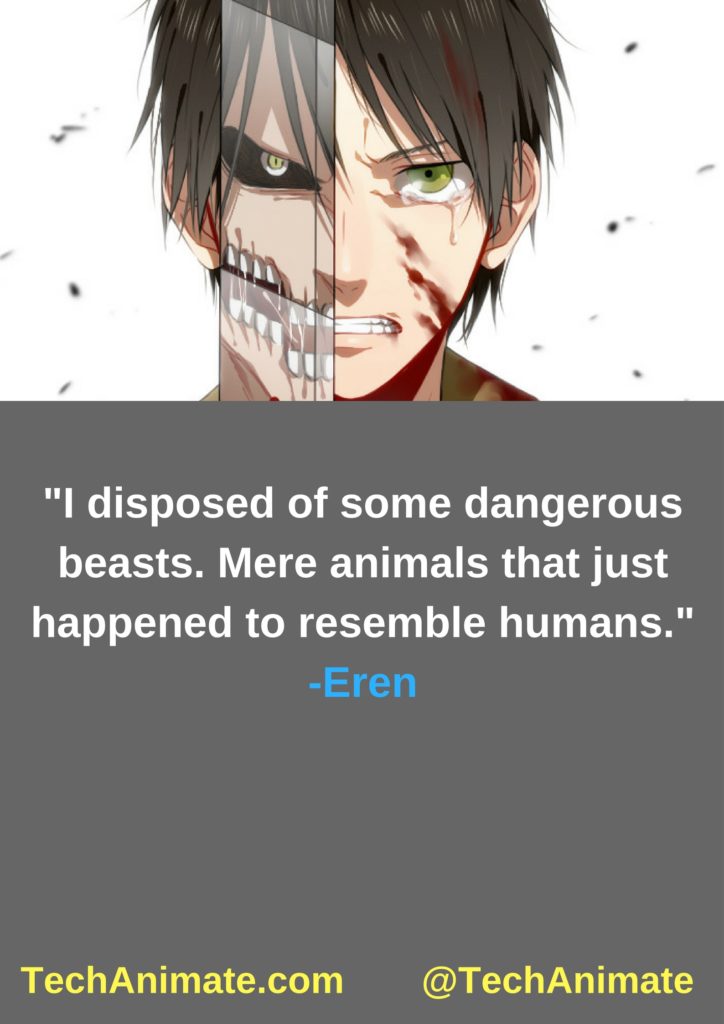 34.”And just like that, everything changed. At that terrible moment, in our hearts, we knew. Home was a pen. Humanity, cattle.”

32.”This time around mankind will feast upon the Titans!”

29.”I’ll tear you apart. Once my hand heals, I’ll rip you apart… Tear you to shreds…Rip you into tiny pieces… And eat you!”

27.”I appreciate that sir… but I’m not stupid. And I’m the last thing you’ll ever see.”

26.”What is the point if those with the means and power do not fight?”

25.”I don’t have time to worry if it’s right or wrong, you can’t hope for a horror story with a happy ending!”

24.”Nothing can suppress a human’s curiosity.”

23.”No matter how messed up things get, you can always figure out the best solution.”

21.”On that day, mankind received a grim reminder. We lived in fear of the Titans, and were disgraced to live in these cages we called walls.”

20.”If you think reality is just living comfortably and following your own whims, can you seriously dare to call yourself a soldier?”

19.”What are you going to do if the ones with the strength don’t fight for you?”

18.”There’s no time to figure out if this the right thing to do! Just move… Don’t try to keep your hands clean. That’s right, the world is cruel.”

15.”How come you get looked down upon just for saying you want to go outside?”

14.”I will wipe the Titans out and leave the confined walls to explore the outside world.”

11.”I’m not like those wall-sheltered pigs, pretending to be tough!”

10..”Actually, the Titans are no big deal. Once we learn how to operate the 3-dimensional maneuver gear, they’ll be no match for us!”

9.”I believed that I must kill them all… That I must annihilate all the Titans myself. That’s what I believed.”

8.”I’ll kill every last one of them and break free of these walls!”

7.”You’re drinking again? Uhm… Aren’t you on duty? But if you’re drunk, how are you gonna fight? When they break the wall and come in!”

6.”I want to see and understand the world outside. I don’t want to die inside these walls without knowing what’s out there! On top of that, if no one takes on their jobs, then those who lost their lives will have died in vain!”

3.”I’ve made it here at last. It’s humanity’s turn now. This time around…mankind will feast upon the Titans!”

2.”I did it! How’s that, Mikasa? I can do this! I can fight the Titans! I don’t need to have you looking after me anymore!”

1.”Armin…because you told me about it… I’m going to go…to the outside world.”

Those were 35 crazy and emotional Eren Jaeger quotes.

My favorite quote was number 16.