The worst best friend ever award goes to Griffith…

well, it’s not something to be proud of, but you know…

Berserk is a super gory manga which takes you on a hell of a ride, literally HELL!

DON’T LET THAT SMILE FOOL YOU!!!

Look at that dirty, revolting smile. You just want to slap him right in the face, chop into pieces and feed to the bloodhounds.

Griffith is one of the evilest Anime characters that you will ever come across.

Griffith builds up a mercenary army, his soldiers’ love, admire, cherish and would die for their leader Griffith.

All a leader can ask for in his followers Griffith has attained.

Griffith’s best friend “Guts” is also part of the mercenary army. Guts has gone through so much.

He was born from a dead corpse, then found by a woman named “Shisu“. She picked Guts up and begged her mercenary husband named “Gambino” to let her take Guts in. When Guts reached the age of 3 Shisu died a horrible death. A disease-infested her body.

Whiles Shisu was dying a grueling death. Guts watched it all happen, powerless Guts could only watch. The only mother-like figure Guts had was gone at only age 3.

Gambino decided to take him under his wing and trained Guts under the sword mercilessly. 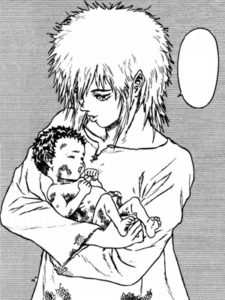 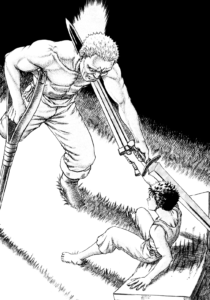 Guts later enlisted in the mercenary group at age 9.

Donovan, part of the same mercenary group claims that he bought Guts for a night to satisfy his depraved pleasures, Guts tried to fight back but was powerless against Donvan . Guts was then defiled and humiliated that night.

Years later Gambino loses his leg in battle, angry like never before. Gambino, as well as the other men, blamed Guts for Shisu’s death and Gambino’s war lost leg. Gambino breaks down, he goes into Gut’s tent and tries to murder Guts! Guts is then forced to defend himself and drives his sword through Gambino!

…Guts joins up with the mercenary group Band of the Hawk. They fight so many battles together, no matter how many times they were outnumbered the Band of the Hawk always dominate the battlefield.

Now Guts has fought his way up to the commander and he cares about his men’s lives. Their well-being and safety are important to Guts. 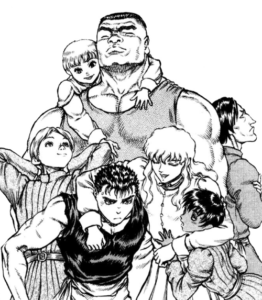 Guts has never had a friend like Griffith before, they enjoy each others company and they always have each other’s 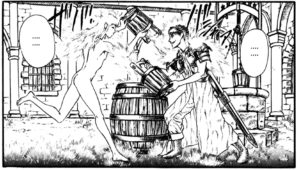 Guts and Griffith have a bond like nobody else has ever had before, they laughed together, had water fights together and they even fought a huge demon together!

Finally, things were looking up for Guts. 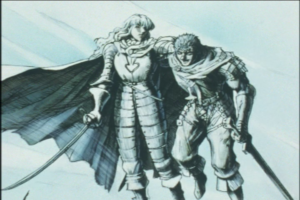 …every up has its down

This down was not a pleasant one.

Griffith is captured and taken to a torture chamber.

Guts risks his life-saving Griffith from the torture chamber. Killing the torturer and then getting on their horses to escape.

Griffith’s body had been destroyed.

Griffith could no longer talk, walk, wield a sword and no longer command his army! The damage to Griffith’s body 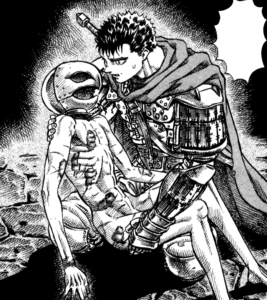 Guts could only watch his friend suffer.

Griffith finds Griffith’s behelit and unintentionally activates it. Suddenly the sky reddens, they are no longer walking on grass but on skulls.

Demons are literally raining everywhere and giant demons appear who call themselves the God Hand. The God Hand offer to make Griffith strong again and allow him to peruse his dream in the form of a demon in exchange for his all his friends as a sacrifice.

Guts thinks this is crazy, Griffith would never do something like that!

…suddenly Guts and Griffith are separated and Griffith is now on his own. The God Hand manages to convince Griffith to sacrifice all his friends! Griffith then says “I sacrifice”. Demons overwhelm the men and slaughter them!

Griffith then appears again but not as Griffith the leader of the Hawks.

But as Femto the wings of darkness.

Guts was shocked, I would like to say the others were shocked but they were dead.

Guts stares at Griffith thinking what the hell had happened?

A hand reaches down with Casca (Gut’s lover) in it and hands her over to the demon who was once Griffith. Griffith begins to touch Casca.

Guts shouts: “WHAT THE HELL ARE YOU DOING?!”

He then charges at Griffith’s direction but a demon bites Gut’s arm stopping him in his tracks. Casca then wakes up and says “Griffith”?

He then chops his arm off to get to Griffith!!!

Casca tells Guts not to look at her. Guts closes his eyes but then a demon opens them, gouging an eye out in the process!

After Griffith had done with her, he tosses her aside like a piece of garbage. 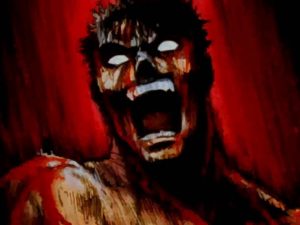 Get Your Self Started On The BERSERK Manga! You Won’t Be Disappointed. (WARNING: MATURE, EXTREME, BLOODY Content)  Not For The Faint Of Heart…

Q: What year did the first Berserk anime air?
A: The first anime and episode 1 aired in Berserk 1997

Q: Which year did the berserk movie air?
A: The movie aired in 2012

Q: What’s the latest Berserk game?
A: Band Of The Hawk